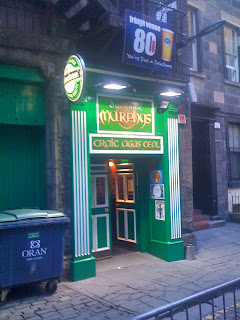 We wandered into this pub after dinner and found ourselves the only two people in the audience for the 8:30pm show entitled Sherlock Holmes: Return of the Hound staged by the We Should Get a Boat Comedy Theatre. They started a few minutes late after 2/3rds of the performers went outside to find another five people to join us in the crowd. By the end, only four of us remained. I hope this was the worst show at the PBH's Free Fringe. At least the performers weren't charged for use of the venue.

I left them a generous donation and we finished our Guinness and cider, taking a moment to enjoy the pub. Dropkick Murphy's is surprisingly big, with lots of character, a cavernous ceiling, and nooks and crannies to drink quietly. It is open until 5AM during the month of August, and we wondered what it would be like at 4 in the morning. 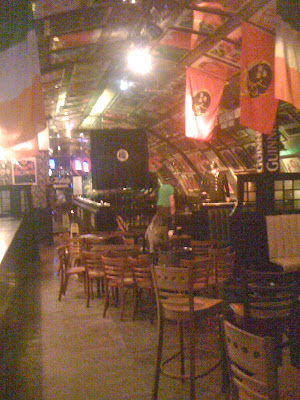 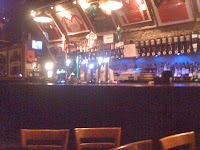 Was great to see and perform for you....attendance was a little low that night! Thank you very much for the generous donation which has been forwarded to the C.A..T. campaign.
Have enjoyed reading through your blog and plan to visit some of the pubs.
All best wishes from We Should Get A Boat