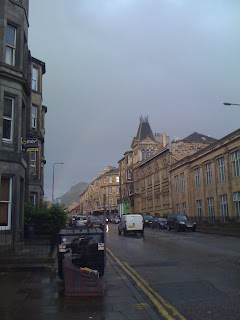 We should have known we were in for a special evening. Despite the downpour that accompanied our long walk to Newington, south-east of Old Town, the sun eventually came out and pleasured us with a perfect rainbow that appeared to end at the foot of Arthur's Seat.

It turns out, the pot of gold that awaited us was a high-density collection of neighbourhood pubs that are clustered around this part of the city. Our first stop was the Drouthy Neebors, with its charming name and sexy exterior. However, we found the interior lacked soul power. Linus was impressed with how inexpensive the beer was. He had a Czech Staropramen while I shunned the lager-heavy tap rotation and went for a bottle of Innis & Gunn. 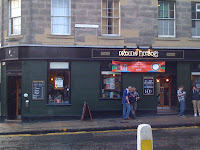 Email ThisBlogThis!Share to TwitterShare to FacebookShare to Pinterest
Labels: forgettable