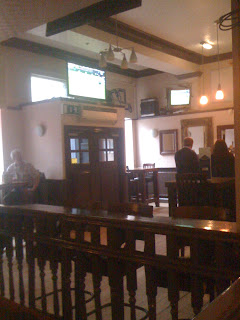 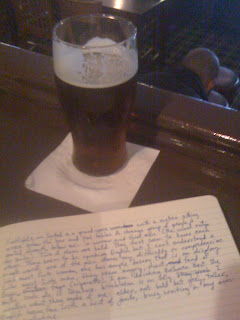 Footlights on Spittal is a grand space with a sunken sitting area below the bar and pool tables. A strange group is seated directly below me: a woman and three men. Two of them are bald. They don't seem to know each other. They seem to be speaking English but I can't understand a single word; one of the men - the one with hair who is sitting next to the woman on a couch - shares my difficulty in comprehension. Like many Scots women, the girl has ample bosom that is on display. Like many Scots men, they seem angry, short, fond of lager and fags (cigarettes). I am drinking Belhaven Best. The only cask ale is Deuchars. Wimbledon tennis is on the telly. I wonder what this group of people make of me: older, not bald but grey, taller, English horse-face with a hint of jowls, busy writing in my over-sized Moleskine notebook. They all keep shaking hands.

Then it was like a switch was flipped and the man next to the woman became very agitated when she left to use the toilet. He paced around near me, very drunk, while the other two guys implored him to come and sit down. He eventually did, but kept smacking his hands together loudly and saying he wanted to hit something. His body language suggested he was feeling insecure, vulnerable, childlike. He kept picking up his empty glass of Tennent's. I was afraid he was going to throw it at me. I tried to avoid eye contact with him, but it was no use. "Hey! You! You! Fookin' c*nt!" One of his mates shushed him and offered me an apology. The bartender - who had already warned them to keep it down once his hand-clapping had started - asked them to leave. While waiting for one of the others to drink up, the agitated one must have yelled "Fookin' c*nt!" at least half a dozen more times, to no one yet anyone. A walking, talking Irvine Welsh stereotype of antisocial Scotland.

Go SNP independence! It can't come soon enough for him, I bet.

When I left Footlights an hour or so later, I saw two police officers talking to him in front of the entrance to the Monboddo Bar at the Point Hotel. One of his bald friends stood by, sheepishly, probably wishing he'd had the sense to have taken his friend home instead of to the nearest bar. Another bad choice. I feel angry with myself for thinking it, but I wonder if the class system is perpetuated as much by the underclass, who gravitate away from education and towards self-destructive behaviour, than it is by the upperclass who conspire to keep their children away from these fookin' c*nts.
Email ThisBlogThis!Share to TwitterShare to FacebookShare to Pinterest
Labels: memorable

That's what you get for sitting there looking all English like. Luckily you never got a "Glasgow Kiss" (Even though it's Edinburgh)