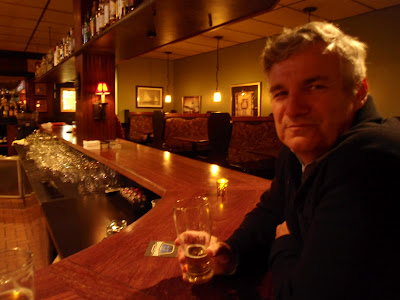 I love my cousin Dean. Here he is drinking a Vancouver Islander Lager from the one and only Vancouver Island Brewery. I had the nearly famous Driftwood Fat Tug IPA. It is a real shame that the wonderful craft beers of British Columbia are unknown and unavailable in the United Kingdom. But I can understand why.

Dean was also in town to visit his parents, and it was nice to have him make a special guest appearance on my blog. I first tried to take him to the Stonehouse Pub out by the ferry terminal, but it was closed for some reason despite what its website says.
Email ThisBlogThis!Share to TwitterShare to FacebookShare to Pinterest
Labels: slick