All chrome and black lounge-style, this pub is clearly marketing itself to the 20,000 students across the street at the University of Edinburgh. There were no cask ales on tap, but I did enjoy a yummy Caffrey's Irish Ale, brewed by none other than Molson Coors UK, who inherited it when Molson Coors acquired Carling back in 2002. 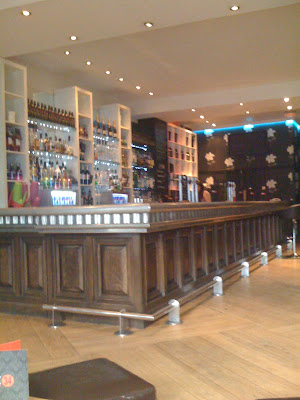 According to Wikipedia, Caffrey's Irish Ale is a beer that used to come from Belfast, Northern Ireland where it was brewed by the Thomas Caffrey Brewing Company. Caffrey's was acquired by Charringtons (later Bass Charrington) in 1964 and then by Interbrew (later InBev) in 2000, who sold it along with Carling to Molson Coors in 2001. The brewery in Belfast was closed by Interbrew in 2005.
Email ThisBlogThis!Share to TwitterShare to FacebookShare to Pinterest
Labels: forgettable, slick