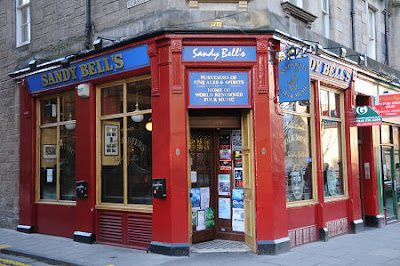 A pub that fancies itself as a bit of a big deal in the local folk music scene, Sandy Bell's felt like an Irish pub. There was a small group of fiddlers sitting at a table in the back, playing traditional Irish folk tunes. I suspected the bartender was from Ireland rather than Scotland, as her slight frame, short black hair, and blue eyes reminded me more of Sinead O'Connor and less of Kelly Ellard. Indeed, she confirmed she was from the west coast of Ireland, just north of Kerry.

I drank an Ossian Pale Ale from the Inveralmond Brewery in Perth, Scotland. Here's a picture of the aforementioned bartender's head floating above my beer. 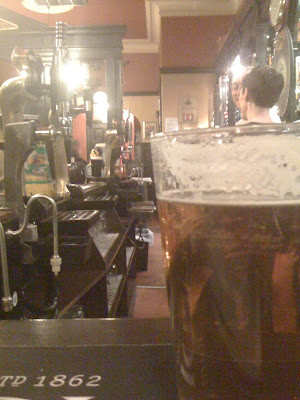 According to the brewery website, Ossian, Son of Fingal, was a legendary warrior from the 3rd century. His grave stone can be seen north west of Perth in the 'Sma Glen', of which Sir Walter Scott wrote.... "In this still glen, remote from men, Sleeps Ossian, in the narrow glen".

Available throughout the year, this superb golden ale continues to win awards. A pale, golden coloured brew with a full bodied fruity flavour with distinct nutty tomes and a hoppy, zesty, orange aroma, derived from First Gold and Cascade hops. Excellent brewing resulted in Ossian being judged the Champion Beer of Scotland.

It was okay. I followed it up with a Guinness.
Email ThisBlogThis!Share to TwitterShare to FacebookShare to Pinterest
Labels: charming