This is my second visit to The Cask & Barrel Ale House, having dropped in with Birgit and Meghan on our holiday to the UK last year. Here is a picture from last year of Birgit sampling some of the delicious drinks on tap, and some hot nuts. 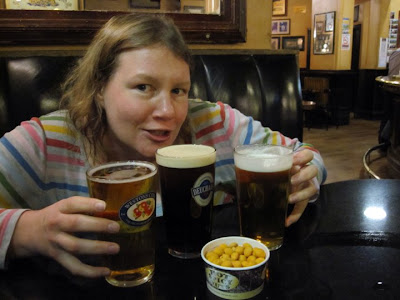 I really like this pub. The bar itself is a semi-circular affair in the middle of the room, surrounded by tons (or loads, as the locals would say) of televisions. Perfect for some Tuesday night football. Manchester United was busy dismantling Leeds while Svea and I hung out, waiting for Rebecca's drawing class to end. Cheering for Man U is like cheering for the NY Yankees: ridiculously half-assed. It's who you cheer for (or support, as the locals would say) when you don't like sports.

I wonder if there is a Chinese restaurant somewhere called Man-Yu Wok?

Enough about soccer (or football, as the locals would say). Beer is beer in any dialect, and the tap selection at the Cask & Barrel befit its name. My first pint was Young's Special London Ale, which really was quite special. The history of Young's is very interesting, though in recent times they have gone quite corporate, through merger with Wells and now buying up pub chains to ensure distribution channels. I think the beer industry here could benefit from some regulation where a firewall is erected between the pubs and the product; kind of like how in Canada the CRTC used to forbid a carrier from also owning the content. Did you know that in Ontario, the monopolist Beer Stores are owned by three horribly bad foreign breweries? Now that is something to riot in the streets about.

Svea was enjoying a Crabbies Ginger Beer, which she said was so good it makes the ginger beer at The Reef taste like it was cold filtered through the decomposing remains of Bob Marley. My second pint was an Orkney Best. I'm afraid if that's the best that The Highland Brewing Company has to offer, they are in serious shit (or shite, as the locals would say).
Email ThisBlogThis!Share to TwitterShare to FacebookShare to Pinterest
Labels: favourite